An interview with Gillian Baxter

When you write pony books, it makes life much easier if you have ponies trotting through your own consciousness: the Black Boy you learned to ride on, or the evil Benjamin who dumped you on your first riding lesson. When I talked to her, I was struck by just how many of Gillian Baxter’s equine characters were based on her own horses and ponies. Her books are full of ponies she has known or owned. But ponies weren’t always part of her life. None of her family were horsey, but her grandmother used to tell Gillian stories of  horses. ‘One used to pull my great-grandfather’s cobbler’s cart around big houses in the Midlands, where he would fit shoes for everyone; from the maid to the owners of the house. The horse was called Bob, and he was terrified of steam-engines and newspapers. I think that was the start of my fascination with horses.’ Gillian went to a convent school, and then Camden School for Girls in London – not to a boarding school, which I asked about as I wondered if the school Roberta and Ellen go to in Jump for the Stars existed. It did, and was based on one a friend of Gillian’s went to, out of which she used to sneak on regular occasions. I asked Gillian if she had ever done this but she laughed and said she was rather more law-abiding! Gillian first started riding when she was 12 at the De Vere Stables in Kensington, London. Kensington was as built up then as it is now, and so most of Gillian’s early riding experiences took place in about as urban an environment as you can think of: one very, very far away from the traditional rural idyll of most pony books.  Once she started riding she rode many of the De Vere Stables’ own ponies, but also kept her first pony, Tommy, there at part-livery. Tommy, a 14.2 bay cob, was ‘lazy but nice-looking.’ Did he ever find a spark, I asked, imagining Gillian careering round Hyde Park. ‘No!’ she said. ‘He never changed!’ She told me about some of the ponies she had ridden who treated Hyde Park without sufficient and proper respect. Amber, one of her favourite ponies, did apparently ‘career around the park, but she wasn’t as bad as one pony I knew who got loose, jumped the railings into Park Lane and was eventually banned from the Park by the police.’ Unlike Gillian, I learned to ride in the country so had room to spare when ponies cared off with me. Had I ridden in Hyde Park I think that I, like the Bad Pony, would also have been banned. 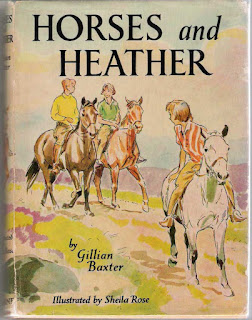 By the time Gillian and her family moved to Surrey – Gatton Park near Reigate – she had well and truly left school. ‘I didn’t,’ she said, ‘go to school as much as I should have, and I left as soon as possible.’ She had already had a book published, Horses and Heather (1956), which appeared when she was fifteen. It is set firmly in the countryside, and concerns the adventures of a group of children who achieve that pinnacle of childish horsey ambition: running the riding school. Gillian’s early literary endeavours, however, were concerned with much smaller animals. ‘I always wrote,’ she said, ‘but I started by writing stories about guinea pigs and mice. I had a lot of small animals – at one point I actually had over 100 mice! I was always writing when I was a child, and even more so when I got my first typewriter.’ Gillian’s mother also wrote, and had some children’s stories published in ladies’ papers, so like the Pullein-Thompsons, Gillian had maternal encouragement. Her parents were thrilled when her first book appeared. The books Gillian wrote over the next ten years were unusual because she focussed on teenagers and girls in their early twenties. I asked why she wrote about teenagers when so many authors wrote about younger children. ‘I wrote about the age I knew and stayed with them as they grew up. I think it’s important to go with your characters.’ She was lucky with her publishers: not all were happy for their authors’ characters to age. After the Noel and Henry series, Collins forbade Josphine Pullein-Thompson from writing another series where the characters aged. Gillian’s publishers, Evans, were already publishing Lorna Hill’s Sadler’s Wells ballet series, in which the heroine Veronica not only ages, she has a child, so presumably didn’t have Collins’ objections. The next book to appear after Horses and Heather was the start of the Bracken Stables series, Jump to the Stars (1957). Gillian wasn’t writing full-time at that point, but had to fit writing between her two jobs, working for Country Life magazine as a typist, and driving her father (an economist) around the country. 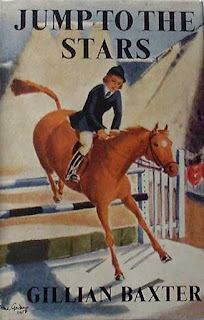 Her heroine, Bobby, goes, over the course of the series, from school girl to professional rider who is about to marry Guy. And there the series ends … leaving many of us champing at the bit wondering what happened next. What happened next never made its way into a book (although Gillian when I spoke to her was toying with the idea of putting it there), but the story was all there in her head. Bobby and Guy marry, and have twin children, a girl (keen on horses) and a boy (not). Shelta is in foal, but to a half-wild Gipsy cob. She eventually has the foal after a difficult birth, and the boy bonds with it.
The Bracken Stables themselves were an obviously professional environment, for which Gillian had plenty to draw on from her experiences working for Robert Hall, at the Fulmer School of Equitation, when she was about 17. Robert Hall had studied at the Spanish Riding School, and brought Lipizzanners over to the UK.  I asked what it was like working for him. ‘It was hard work! He had two distinct yards: one was a riding school, and one of my first jobs was to wash all the tails of the riding school horses. They hadn’t been touched for weeks – only a quick brush. His other yard had his Lipizzaners and dressage horses and it was absolutely perfect. I had to groom the dressage horses, and when I did, I had to knock out the curry comb on the floor outside so he could check how much grease I was getting out!’ All this inspired Gillian’s dressage novel, The Stables at Hampton (1961). The heroine of the story, Tamara, came to Gillian before the story itself. ‘Tamara wasn’t the right character for a jumping novel, but she did fit one based on dressage. The palomino horse in the story existed: he was stabled at De Vere, and danced and acted just as he does in the book.’ 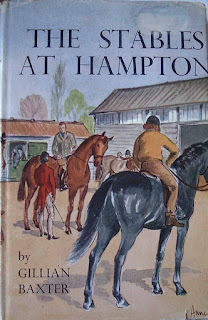 Gillian was the first UK writer to write a pony book about dressage, and several of her books are unique: I cannot think of another book which combines ponies and racing cars (Ribbons and Rings, 1960), and Tan and Tarmac (1958) is quite possibly the only pony book centred around riding in London, without a later escape to the more horse-friendly countryside. The De Vere stables, where Gillian learned to ride, made an appearance in Tan and Tarmac – long gone now, the stables were used by the Civil Service Riding Club until they were re-developed. They, and the ponies who lived there, now live on only in memories and in Tan and Tarmac. The ponies in Tan and Tarmac were nearly all real, as were some of the characters: in fact Gillian went to the 70th birthday part of the real life Tessa! The filming the stables in the book go for were however based on another London stable: Robert Barley’s stables in Hyde Park worked on many films. Robert was known for driving a stagecoach through London to advertise films. Gillian’s books for an older audience came to an end when Evans, in common with other publishers, decided there was no more mileage in pony books, and no longer wanted to publish them. She had already written a book for younger readers for the educational publishers, Arnolds, to encourage reluctant readers: this was Sweet Rock (1966), which is also a pony story. ‘After Evans, my agent suggested I write for a younger age group, and so I wrote the Magic and Moonshine series. The first of them, Pantomine Ponies (1969), was my most successful book. After this series came to an end, I carried on writing for D C Thomson [the magazine publishers].’ 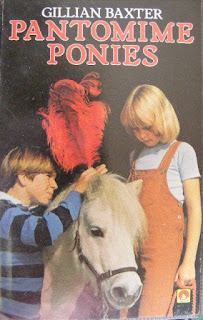 I knew Primrose Cumming, another pony author, had also written for D C Thomson at this time, and asked Gillian if she’d ever met her: she hadn’t herself, she said, but knew of her. Apparently Primrose would meet the publishers in a station wagon car with grass growing out of it! Besides writing stories for D C Thomson on a whole range of subjects, including dancing and a haunted computer (though not in the same story), Gillian wrote stories for D C Thomson about a girl called Wendy. ‘Her parents owned a dressage and jumping stables. Wendy had a boyfriend, and also some quite unlikely adventures – wild horses to tame, ghost horses – there was one story based on mobile phones, and one set in the USA where she was cornered by a cougar.’ The stories were developed into books and published in Swedish, but not under Gillian’s name. Eventually these stories came to a stop as there were problems with the translations. During this period, Gillian wrote another book which did not appear under her own name: Sue-Elaine Draws a Horse (1970), which she ghost-wrote with Marion Coakes. The book appeared under the names Marion Coakes and Gillian Hirst (Gillian’s married name). I asked if they had written the book together. ‘No, I did that!’ And who had the idea for the book? ‘I did! Doing the research for the book with Marion was great fun: she was a lovely person. I went to visit her to find out how she thought of things, and the sort of words she used.’ 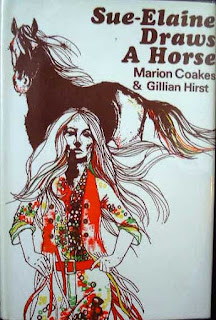 Gillian’s last pony book, Bargain Horses (1992) came about when J A Allen asked her to write a book for their Junior Equestrian Fiction series. It’s the story of Mary Conway and her daughter Gemma. Mary is determined to prove to the world that she can train event horses, but it is her daughter who has to suffer the difficult, and sometimes downright dangerous, horses her mother buys for peanuts. ‘Some aspects of the mother and daughter in the story are based on me and my daughters, but I don’t think I was anywhere near as pushy as the mother, though I have seen a lot of very pushy mothers as both my daughters ride: one events, and one does dressage and jumps. The horse Weston was based on a big strong horse my daughter and I had to give up on.’ Gillian still rides and has horses about the place herself.  When I spoke to her last, she had just come in from trying to get one of her daughter’s horses to load into their new horsebox, which ended, as she said, with her swinging from his head. She now lives in Pembrokeshire, and has four horses of her own and one who is retired – he is a pony left over from when she did trekking. 13.2 Nimble once distinguished himself by taking off with a trekker and jumping two cattle grids, by which time his rider had wisely baled out. Horses are still very much part of Gillian’s life, and she still loves writing. She has just brought out With Vacant Possession as an e-book.

I’m a freelance writer, editor and proof reader. I’ve written Heroines on Horseback (2019), a gallop through the pony book in children’s fiction, and have written the world’s largest website on equine literature.

I've now started up a publishing company dedicated to bringing classic pony fiction back into print.